I just realised I've posted this article pretty much everywhere and the moon apart from this blog!

Massive thanks to Backseat Mafia for the feature!! 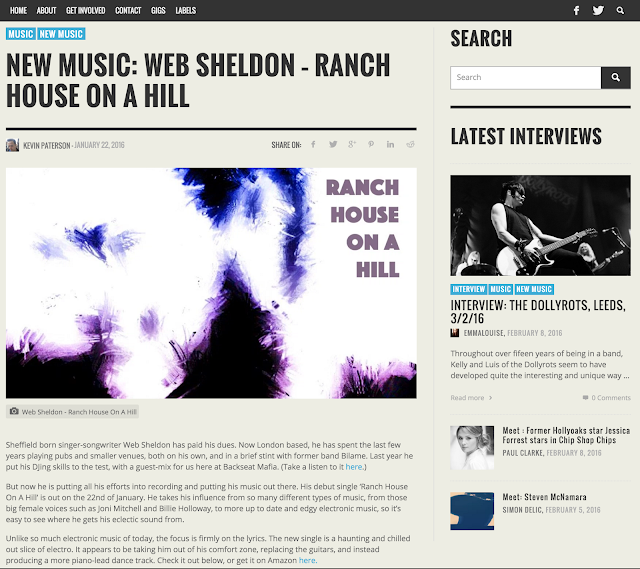 Posted by Unknown at 6:15 PM No comments:

I actually don't have a great track record with this; I did it for the first time in 2012 I finished with about 10 songs and the next year I only made one! haha  I've got a lot of mini music projects on at the moment so I'm not expecting many this year either BUT I have completed my first already!

And I'm pretty excited cos it's an awesome blend of dirty electro and hip hop and it's talking about a lot of things that are important to me at the moment.

It's also available on free download for a few days.  I will be releasing another version with a better mix & master in future but this is the version for now whilst I work to try and get more FAWM songs completed.

A wise owl man once said this to me
Ask questions; find out your history
Stop repeating and reliving misery
Or others before us suffered for nothing
As a civilisation we’re failing
Jailing addicts, while bankers be staying
In power with a fresh pot of sterling
And if they screw up again, no worries!
It’s not history in school but propaganda
Carefully selected for your nation’s agenda
So you’ll kill any innocent when they send ya
Into the next war, more young defenders
Been talking ‘bout climate change since the sixties
If we wake up, can we still fix this?
American senators still think its fiction
And you can’t argue with fools man, thats a given
I won’t force feed my child religion
Problems are fixed with actions not praying
I think that the paradise is us being alive
Heaven and hell can wait till the afterlife
Be good cos you’re a good human being x3
What’ll ya do when ya gods not watching?
Be good cos you’re a good human being x 3
What’ll ya do when there’s no one watching?
Be good cos you’re a good human being x 3
Not cos heaven or hell might be waiting
Are they watching you now?
Are you checking yourself?
Are you holding it down?
Are you living through living hell?
Everybody's got their own story
I shouldn't criticise how others are coping
If you've seen the light in God and you feel saved
I'll respect your choices to the grave, but
I'm more interested in truth than faith
If there's nothing after we die and I slaved
All those years feeling guilty,
And chipping off bits of myself #to be
Better at some values that i never bought into
To be praying and powerless and waiting
For someone else to sort it all out, i'm just sayin'
I need to make the most of this life
i don't know whats next

So i'm living in this life

Posted by Unknown at 1:46 AM No comments: