As with all Decembers, this has been busy one - although busy in a different way to all the other Decembers as this year I was moving house and working on the solo EP.  It's been a good month though, very creative, lots of ideas flowing - which is great because it means I have lots of choice for the track listing.  I was determined to have a proper holiday but I haven't quite managed it yet (even today! lol) as I'm too excited with the EP to put the laptop down :D

So I'm just posting to say thank you to everyone who has supported me and supported Bilamie this year; friends coming to gigs in London and Madrid, people who have shared posts/music on social networks, promoters and venues we have worked with and fellow artists we've had the pleasure of watching.

It's been a wonderful year of self discovery and I have never been so excited about the future before.

So thanks to everyone, enjoy the rest of Christmas and New Years.

See you in January!! x

I COULDN'T STOP laughing at Twitter just now and just had to post these somewhere... Merry Xmas Eve!!

Posted by Unknown at 9:34 AM No comments:

My band Bilamie played here a few weeks ago! I'm going to play a solo set next, it's going to be mainly acoustic, maybe with a little percussion etc in the background... I've been practicing a cover of The Fugees 'Ready Or Not' and I've been ITCHING to play it live... so this is a definite for the night! :D

Posted by Unknown at 7:00 AM No comments:

I'm not sure where I first heard someone refer to Wimbledon as WIMBLES but it just tickled me somehow... I think it might be because it reminded me of Wombles, but I haven't unlocked that nugget yet.

So I'm I'm in this pub in WIMBLES at the moment because I usually work in the house all day and sometimes I need to escape. So anyway they played Bon Jovi's 'Always', I knew it from first second when the drums kicked in.  I used to be quite a fan when I was a small Web Sheldon... I remember I was about 13/14, I'd just bought their compilation Cross Roads and I went with my Mum into Derbyshire and walked around a street market... I ended up buying this kind of mystical/alternative silver necklace... I was so happy with it and thought it was cool and awesome! And listening to this song just brought that memory back :)

When you are a child or even a teenager, really small events or changes can seem like massive things to you and at that time, it's so easy to have new experiences.  I remember though I got to the age of about 24 and I was finding it harder to find new and exciting things to do.  It's easy at that point, to accept that life isn't as exciting as you thought it would be, orrrrrr you can just keep pushing further in different directions! I think the easiest way to apply this in proper adulthood though is to keep doing things that are outside of your comfort zone. 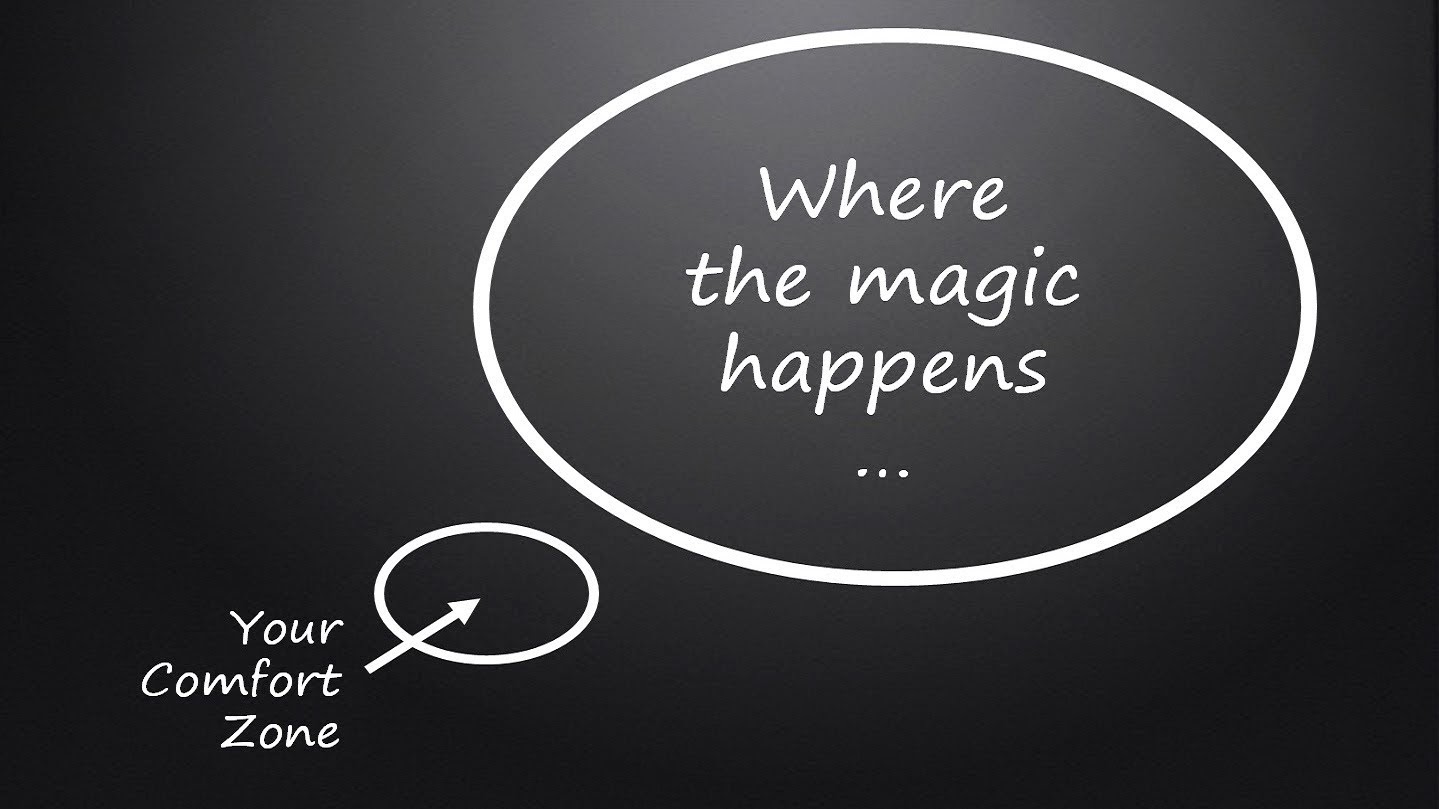 I love this picture, I really think it's true.  But you have to force yourself because otherwise it's so much easier to do 'comforting' things instead.  This could be as simple as instead of always going to the same restaurant, go to a different one insetad, but obviously that's not exactly a challenge! For example, for me at the moment, I'm working on a song where I have a rap part to do.  I used to do a little bit of rapping in previous bands because I have a strong love for hip hop, but I've never done it solo before because without a band behind me, it feels too far out of my comfort zone.

So I guess it's about finding which ways you can push yourself, and finding one or two that are really going to mean something to you if you do them.

I have to wee now.

A WimblesWee.
Posted by Unknown at 5:08 PM No comments:

Here's a quick preview of what I'm up to in December!

Tues 2nd December
It's the launch night of Winterville in Victoria Park on Tuesday and I'll be playing a lonnnng string of genre-hopping acoustic covers (including all you've ever heard me play and many more!) and maybe a few of my own whilst the Christmassy people walk past drinking mulled wine! There'll be quite a variety of covers: Joni Mitchell, Lady Gaga, The Fugees, Dolly Parton, Billie Holiday, Bob Dylan, TLC, Aretha Franklin, Dusty Springfield, Leonard Cohen, Madonna, Elvis Priestly, David Bowie, MGMT, CeCe Peniston, Neil Sedaka, Catatonia, The Cranberries...and a spiralling list of others :D

Sat 6th December
I'll be DJ-ing at Twisted Winter Carnival 'where Christmas is a strange idea and you can keep all your halloween gear...dress to impress'.. Tickets for £3 and it goes on till late! I'll be playing quite a mixture of present day pop, 90's, 80's, electronic and hip hop!

Saturday 13th December
My awesome band Bilamie will be playing at Underbelly of Hoxton! I've been looking forward to playing this gig for *months* now, I reckon it's going to be a night to remember! Our last gig of 2014 and we'll have an ALBUM PREVIEW on sale with songs Friendly Fire, Deeper Interaction and 2 remixes of album tracks, one by MuckyCherub and one by meeeeee.  There'll also be Bilamie bottle openers and badges flying around just waiting to be taken into new loving homes!