What is Raat Ka Nasha (Feat. Of Embla) about?


If I'm completely honest, this song just came out of nowhere. I had some dirty electronic beats that I was messing with and a keyboard hook. At the time of writing the lyrics, I was thinking about this studio apartment that I used to live in back in 2012 in Manchester. I had this awesome job that I loved, living 10 minutes from work, I had loads of time for music and I was running lots and lifting weights regularly and generally just felt like I had a good control over my life.

At the time of writing, I'd played a gig a few months before in a venue called The Good Ship in North West London. It was actually a gig my former band Bilamie had meant to play but we'd broken up a few weeks before so I decided to get my s**t together and play a solo electronic style gig. On that night, there was an group called Of Embla @ofembla playing, the singer was called Maiken. I already heard one of her songs online called 'Puppet' and it kind of blew me away. It was sultry, dark, sexy, jazzy and just a combination of pure magic. I got talking to her on that evening and we said we would work together at some point.

So I when this track came up, I asked if she'd like to sing the chorus. When she came over to record, she brought a poem she had written called Chaos Machine. We had a jam to incorporate it into the song and she did this awesome performance, just speaking the words to the music... I loved it and thought it fitted perfectly - she sounded powerful (like when I felt I had control over my life), the lyrics were coherent but disjointed (like the lyrics in the first part of the song) and the performance was perfect.

Indian spices, home is
Stubbed roach and rollies
In my finest wine glass
Rocks of ice

City air, city noise
Summer bliss intoxicated joy
Just like my mind
Alive with
A streaming of feelings and drive
These evenings of diving and crashing and
Blissfully feeling my place
In the world

Idelogically speaking,
On behalf of..
Me? You!
The panel has spoken,
Solar panel - electricity
Chaos machinery

Posted by Unknown at 9:55 AM No comments:

'Modern Life Is Lies' IS OUT!

Ok so it's 3:04am here in London and I was determined to sort everything out after midnight so it was ready for when people woke up in the morning! I'm quite aware I don't have thousands of devoted fans waiting for my release, but for the people that are, I appreciate them a lot and want everything to be perfect and ready for the morning when they want to download it :D

But it took a bit longer than anticipated....

I decided to write a bit of a description about each track, which is on my Bandcamp page and on each YouTube video as well...

Ohhh - also, if you listen on Spotify, I've added the lyrics there as well so they match the music ;-)

And here are some links to buy the EP:
Bandcamp
iTunes
Amazon UK - please note that it is available in many other countries on Amazon, just search  "Web Sheldon" + "Modern Life" and you should find it :D
Google Play

Posted by Unknown at 3:08 AM No comments:

Summer Storm - 'Only a Heart Can Feel This Kiss'

You know at the start of a relationship, where things are going great but you haven’t had ‘the conversation’. Then a few months pass, feelings intensify, but you’re still not sure where you stand?

Starts of relationships are wonderful times filled with life affirming excitement and passion. But for someone with self esteem issues, there can also be a darker side to this period. Constant doubt, questions of worthiness, anxiety, overthinking - and all the time keeping it all inside because you want to be their ‘rock’ and you want to be strong for them. That’s what this song is about. It's my only love song on the EP.
The quote is from "Summer Storm", taken from the "Modern Life Is Lies" EP, released on tomorrow (Friday 20th May) via iTunes, Amazon, Spotify, Bandcamp and Google Play. 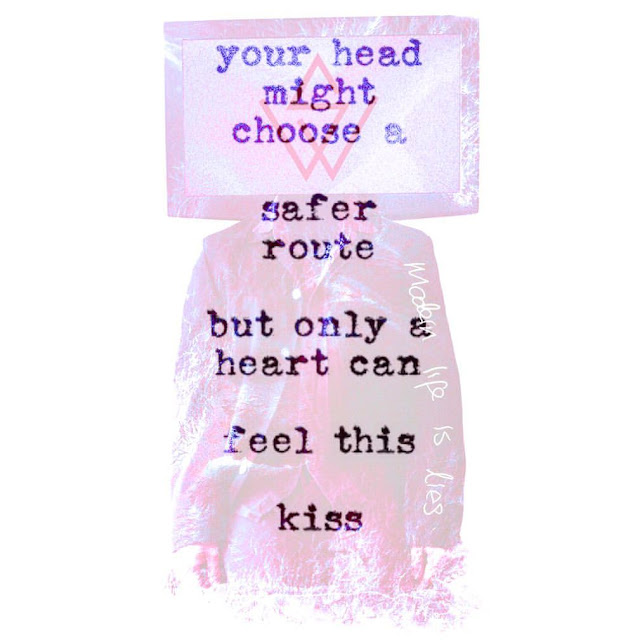 Posted by Unknown at 6:38 PM No comments:

Posted by Unknown at 1:16 PM No comments:

This is an excerpt from the 5th track from my forthcoming EP 'Modern Life Is Lies' and features the Norwegian artist Of Embla. 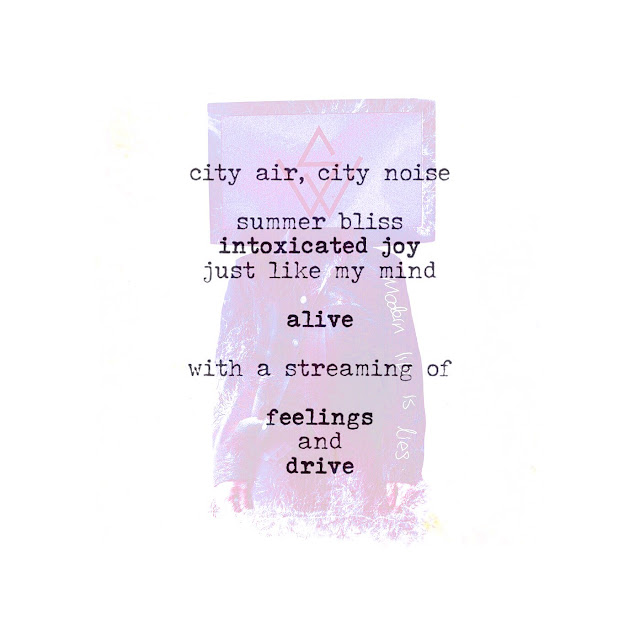 Posted by Unknown at 8:00 PM No comments:

I was raised as a Christian but stopped identifying as one in my mid-teens. I've seen many arguments directed at non-religious people, asking how they know right from wrong if they do not have a religious book with rules to follow. We don't need to follow a religion to live a just life though; morals can come from life experience, from friends/family, from history or from philosophy.


I try to show respect for my friends and for anyone who follows a religion. I've seen people being criticised in the past though for 'picking and choosing' what they follow from their religious book. To me, this is good sense - to question critically or to adapt appropriately to your life and to the times we live in. But if you do 'pick & choose' (for want of a better phrase), please do not feel guilty about it - and don't let anyone make you feel that way.


The quote in the picture is from 'Li(v)es', the first track on my new EP 'Modern Life Is Lies', released on Friday 20th May (this week!) worldwide via iTunes, Amazon, Google Play. 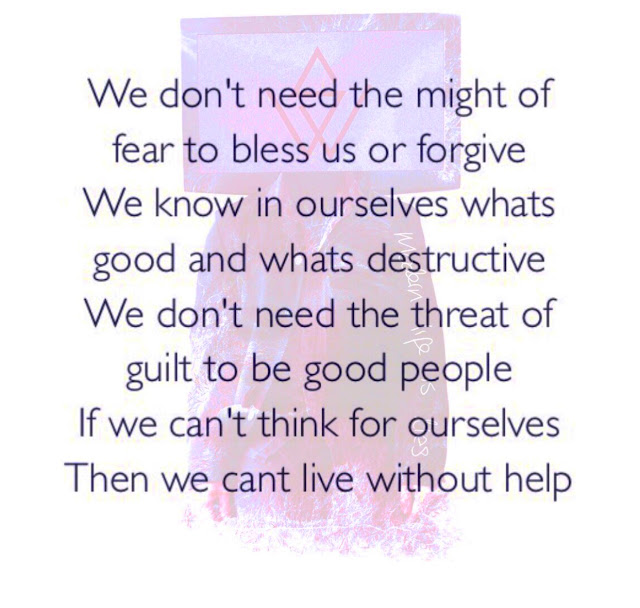 Posted by Unknown at 5:51 PM No comments:


We have the Internet and we have a world of information at our fingertips. We don't have to blindly accept what the television tells us, what our favourite newspaper tells us, or what the corrupted media tell us - we can do a bit research and make up our own minds. 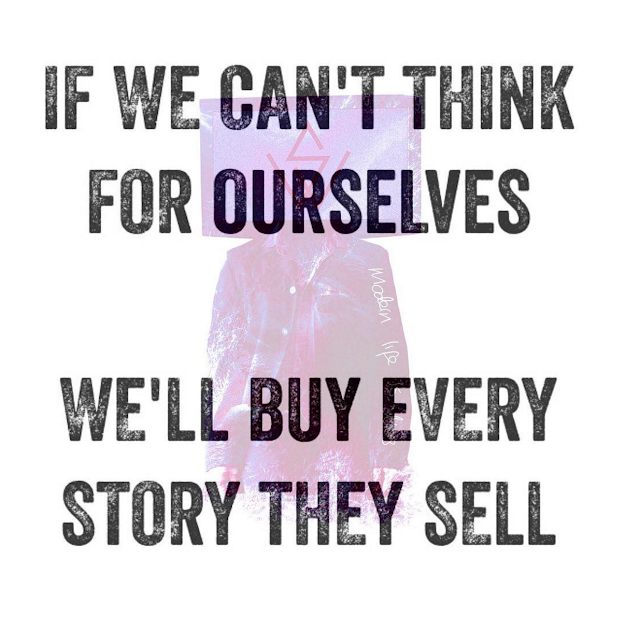 Taken from the song 'Li(v)es', the first track on my EP 'Modern Life Is Lies' released Friday 20th May via iTunes, Amazon, Spotify, Google Play.

I've made a few posters with lyrics from songs on the EP that I'm posting on Facebook / Twitter / Instagram over the next couple of weeks... this is the first one from the first track on the EP "Li(v)es". 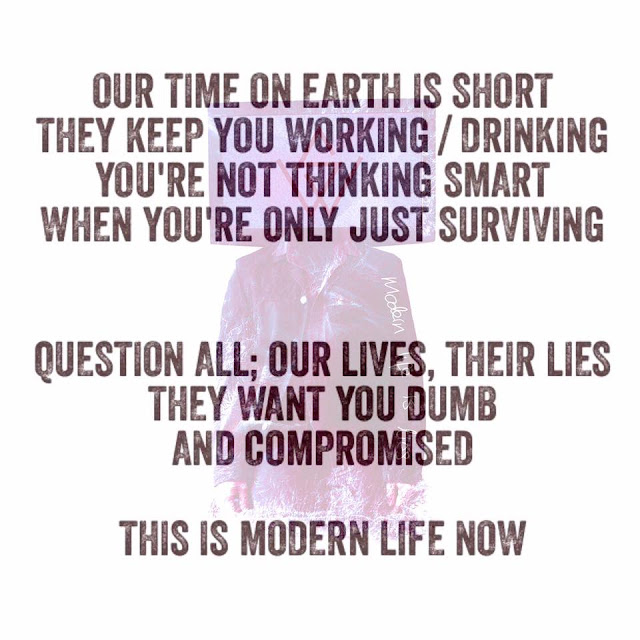 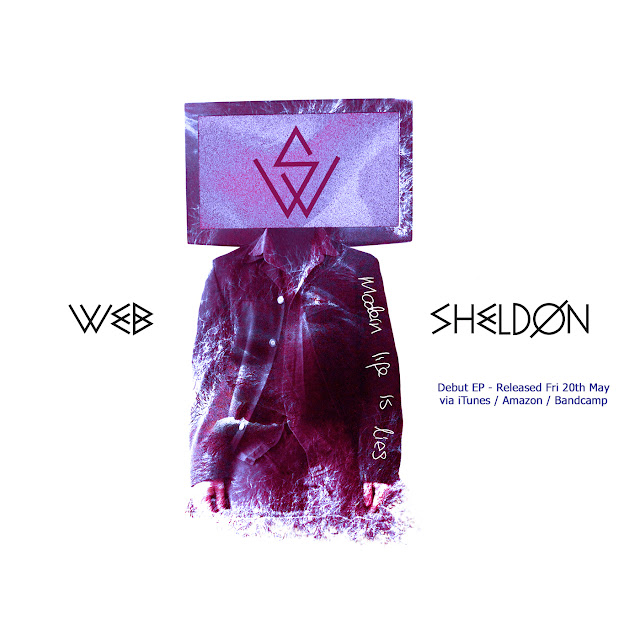 Posted by Unknown at 4:34 PM No comments: